Tasty specialities, you should taste when travelling to Con Dao

Though Con Dao has become a popular destination in recent years in Vietnam, however there have not many tourists know that the food here is very delicious, very fresh and relatively cheap. Some favorite dishes of Con Dao are seafood, or hot porridge. Once you visit Con Dao, you should enjoy the food at local restaurant.

Some attractive specialties of Con Dao may be mentioned:

1. Mackerel with once time in the sun

Con Dao mackerel was known with the name “mackerel with once time in the sun” because after the catch, fishermen will wash mackerels with salt water, drying fish in the sun one time and not marinate more any preservatives. Therefore, typical of the fish have no fishy smell of fresh fish and not dry as the dried fish which was dried several times in the sun. There are many dishes made from this fish such as frying, cooking with sauce… Especially frying with tomato sauce is the most popular dish, serving with rice is delicious and wonderful.

2. Jam of seed of Terminalia catappa

This is a specialty gift bearing the deep stamp of the island. Just set foot on this island, you can see the rows of Terminalia catappa growing along coastal paths.

When going deep into the island you will find Terminalia catappa grown all over the streets. This contributes to the greening and the denseness of Con Dao in the glittering dawn or brighter every sunset.

Terminalia catappa has very large leaves and its fruits too. Fruits ripen with the greatest number in the summer, in about July and August. As Terminalia catappa’s fruits change yellow and fall on the ground they are extremely attractive. That is the time of jam season. Then, people of Con Dao Island take fruits home to dry in the sun. After drying, they will make them separate for getting kernel. This task is not difficult, but it requires workers are really patient because you must sit for a few hours just for a few one hundred grams of kernel. Then they will roast these tiny kernels with salt or sugar to make two major jams: Sweet and savory! Each kind of them owns a special taste that nobody wants to buy just one to enjoy.

Oyster porridge is the dish which travelers often recommend to try when they come to Vung Tau in general or Con Dao in particular.

The main raw material of oyster porridge is a bowl of delicious rice, porridge and fresh oysters. After catching fresh oysters from the sea, they clean, marinate spices and fry to seep through. When cooked porridge done to a turn, they pour fried oysters into the porridge pot and taste.

This type of snail called a very interesting name by its outward appearance like the breasts of young women who are in adolescent age.

They said that this snail lives only in some places, such as Cham islet, Dai Lanh… and Con Dao is the most appropriate place for this strange snail residing and breeding. You can find this snail all year round, but they appear in large number in the full moon days, the middle of the lunar month.

Previously, this dish just offer for kings, but gradually, with the development and proliferation of this snail, it became a daily dish of people on the island.

Like many other snails, Her Breast snail can be processed into many delicious dishes such as boiled, baked, mixed or salad. Boiling is quickest and most convenient. You just wash snail with clean water and put them into the pot for boiling. When snails are done, you only use a knife to get the meat out of the shell snails. And now your task is putting snails with a mix of lemon, pepper and salt to enjoy them, feeling very crispy and sweet meat.

If you are lucky, you can enjoy snails which still hold milk in their body. That dish has a rich and sweet – smelling taste which can not be mistaken with other snails.

After taking an afternoon stroll in the glow sunset on vast beach of white sand, nothing can be compared to enjoying a bowl of boiled or any other way of processing her breast snails and listening soft sounds of the earth and sky. Therefore, if by chance or deliberately visit here, do not be too surprised when someone suddenly reads this lyrics following:

“Who go through Tham and Bai Bang?

Ask Ong Dung that “Has Her Breast snail grown yet?”

Like its name, this moon crab has a very strange shape that there is more bold red rounded crab and bright pink on their backs.

Because of this feature, people on the island named it a strange name, moon crab. And perhaps, with an unusual shape like that it soon became a special food in the wild land where everything here is quiet except the sound of waves. They whisper all day and all night.

This type of crab lives along the cliffs. Crab is not usually delicious, less tasty gravy every date of the full moon, but crab meat is very sweet and fragrant at the beginning or the end of a month.

Especially, after the crabs are cooked, its red color will defeat your stomach definitely. However, it also is not easy to conquer dishes by your hand because shell crab is so hard and you have to use a special tool to enjoy the snow-white and fragrant crabmeat under the challenging and thick shell.

Crab meat is a great food if eaten with salt and pepper lemon. Besides, the local peaple also use crab for processing other dishes such as soup, noodles or cook crab meat with noodles… Each dish has different ways of processing, but in short, they become better, more unique, more sweet due to the taste of this exotic crab.

Con Dao is not only famous for jam of terminalia catappa’s seed,moon crab or her breast snail but also noted about a kind of sauce which was called Nhum sauce.

Nhum is a kind of sea urchin which has a normal size. Not much meat in a Nhum individual, but it is used to create an attractive brown sauce. When using boiled dishes or rice paper roll with Nhum sauce, you can easy to recognize the sweetness of Nhum meat melted in your mouth with a little salty taste of the sea, somewhat sour and greasy taste.

The way to cook it is also sophisticated. To make veritable opaque brown and aromatic sauce bottle, they must put cleaned Nhum meat into the jar or stoneware pot. Then sprinkle more salt on the surface. The jar after sealed will be buried under ashore dried in the sun about 20 days.

After that, it is time for enjoying. Perhaps, they only need a bowl of Nhum sauce and some steam of boiled vegetable to keep a strong attachment to the remote island all their life.

Formerly, Nhum sauce is also a type of food to donate for kings by a typical delicious taste.

Sa Sung is a species of soft body, with the scientific name as Sipunculus nudus. It is one of the rare seafood because catching is difficult and they only appear in large number in early March until July every year. Coming to Con Dao Island, you certainly cannot ignore this specialty.

Sa Sung can also be processed into many different dishes as fried vegetables, porridge, soup, baked golden, crispy, salad… But the most popular dish is grilled Sa Sung, dipped with chili sauce. Sa Sung with both crispy, tough and fat taste is a very nutritious dish.

8. Salad of shark meat and vegetables

This salad is a specialty you will hard forget after enjoying. A plate of shark salad will give you a soft, fragrant aroma shark meat and the spicy flavor of mustard. All of them blend with the natural materials such as Mo leaves, coriander, green banana, sour pineapple and star fruit.

They called it Red Lobster because the distinctive red color that this shrimp bring on its body. It is also known as fire lobster, the king of seafoods on this island.

Red lobster in Con Dao Island is not as big as others varieties of lobster, but its meat is so tough, sweet and firm. Red lobster cannot feed, so they can only catch them from nature. You must pay a huge expense to be able to enjoy red lobster, because the food is not only nutritious but also by catching and processing segment.

Lobster meat is delicious. They also attract us as a layer of golden roe extremely nutritious at the spine and on their head. This brick layer was thicker when winter came. Red Lobster can be processed into many delicious dishes such as sushi, steamed, salad or soup.

Anybody who travelled to Con Dao Island cannot forget the Sweet snail cuisine in here with delicious, wonderful taste. We make sure you will remember about it and want to travel to this island to discover amazing things here.

This snail is usually sold in markets and pretty cheap. Fishermen collect this snail when the tide goes down. At that time snail cling to rocks so it is very easy to pick up us. They bring snail to the market for selling with the price of VND 25,000 – 30,000/kilo. Sweet snail has a layer of thick, gray shell, its mouth has no eyebrows and it live in coastal areas.

The first way to make this snail is boiling, then raise by a thorn and dip with a mix of lemon, pepper and salt. The second way is raising meat from shell and use this to mix with banana flower.

Let’s explore all secrets of this area, Con Dao Island where keeps traditional the beauty of history, natural beauty and many delicious cuisines. 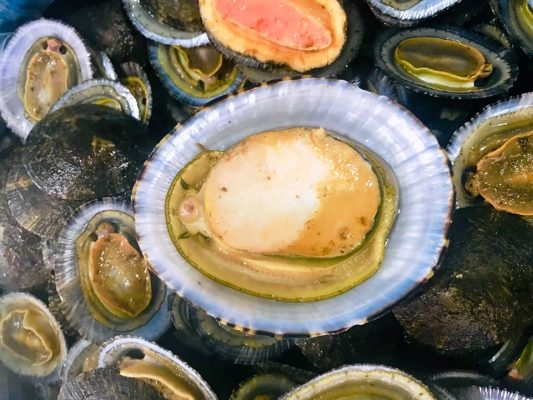