The remote Con Dao group of islands is about 180km from Vung Tau, and has a local population of around 5,000. The main island, Con Son, was a much-feared former penal colony until 1975. Most of the archipelago is now a National Park with some good beaches, clear water with pristine coral, lush tropical forest with many flowers, coconut groves, and few visitors. Accommodation is limited, but a new air link is starting to generate interest in visiting this largely unspoilt area.

Once known as ‘Poulo Condor’ and long considered a Southeast Asian ‘Devil’s Island’, Con Son is the largest island in the archipelago. The infamous Con Son prison complex was established by the French colonial authority early in the nineteenth century. From then until 1975 the French colonial administration, followed by the Saigon government, incarcerated political prisoners in brutal conditions, often in tiny underground boxes known as ‘tiger cages’. The Hang Duong cemetery holds the remains of the many prisoners that died there. 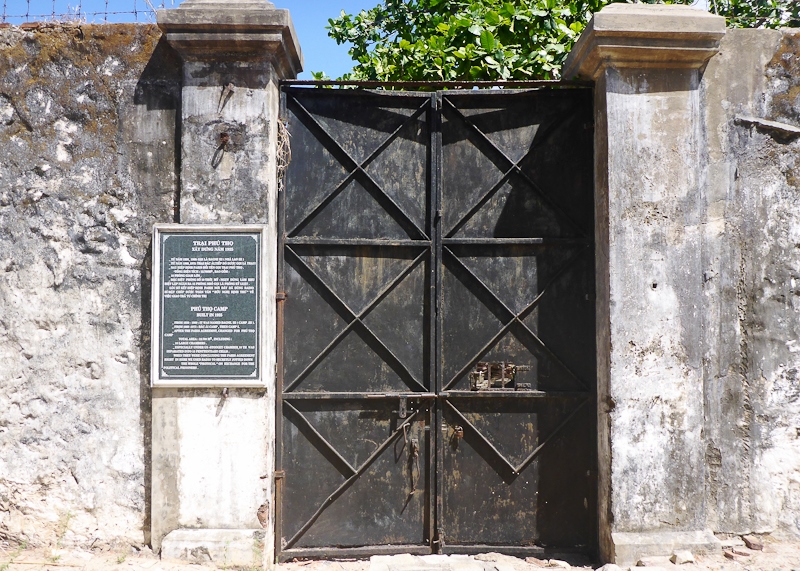 Throughout the colonial period and its use by the Saigon regime, Con Dao’s only inhabitants were the prisoners, their guards, and a small contingent of soldiers and administrators. The true extent of the appalling treatment of inmates only became known after victory and reunification in May 1975.

Since then, a small town has developed on the western side of Con Son in and around the old penal colony complex. It’s an attractive community with excellent civic amenities and a road layout that would put most Vietnamese towns to shame, despite its size.

The French wardens forced prisoners to collect live coral and turn it into lime. The coral reefs survived, but only to face further damage from uncontrolled and destructive fishing. The National Park was established in 1977, but protection extended only to the flora and fauna on land. The park now covers fourteen of the sixteen islands and their surrounding marine areas.

The forest cover on the islands is dense: a sizable proportion is in pristine condition, particularly the humid hill forest growing above 500m above sea level.

Even though control over the exploitative use of the sea was established as late as 1993, and despite the damage wreaked by the French, over a thousand hectares of Con Dao National Park’s coral reefs survive in the shallow waters – a stark contrast to other areas of Vietnam that have low coral cover as a result of overexploitation, destructive fishing, and sedimentation.

The entire marine area is rich in biodiversity: over 1,300 species of sea animals have already been identified. The ecosystems on Con Dao are favourable habitats for rare species such as the Hawksbill and Green Turtles, and Dugong, the strange creatures popularly known as ‘sea cows’ and believed to be the source of the ‘mermaid’ legends from their habit of sunbathing on rocks.

Con Dao National Park is now considered one of the best examples of marine conservation in Vietnam, complete with regulations to limit fishing activities and prohibit destructive fishing, and is a model for marine conservation throughout the country. There are plans for eco-friendly development within the park’s boundaries.

Con Dao has significant value for many types of conservation and eco-friendly tourism development. Five-star PADI scuba diving will soon be available: there are several outstanding dive sites offering sightings of dolphins, turtles and dugong as well as a wide range of other species.

Con Dao is definitely a place for nature lovers, but also an opportunity to visit an unspoilt tropical island before development. There is little doubt that it will soon become a popular destination, so if you want peace and solitude in a pristine setting, now’s the time to go.

There is a small museum in what used to be the French Governor’s residence overlooking the main bay. Its four rooms cover the islands’ history, most of which centres upon the penal colony. The first room contains general information about the archipelago. The second is called ‘Hell on Earth’. On its walls are faded photographs, illustrations and paintings depicting the inhuman treatment meted out by their gaolers.

Under the French, there was some semblance of order and control. Prisoners incarcerated for relatively minor offences could gain privileges for co-operation and be released to the mainland. Under the Saigon regime, prisoners were treated even more brutally. Pictures of the comfortable life of the prison administrators and their guests contrast eerily with the squalor of the inmates. Various artefacts, memorabilia and examples of the instruments of torture are on display – particularly poignant are fragments of paper weapons and costumes made by inmates as props for New Year celebration performances.

The third room has a wall of photographs of prominent Vietnamese agitators and revolutionaries who underwent slow execution in the tiger cages, and other prisoners who served time and later rose to prominence after liberation. There is also a display of makeshift weapons. The final room depicts the years since liberation.

The museum arranges a tour of the complex with a guide. However, the level of English spoken is low, so patience and a phrase book are necessary. The tour should take a couple of hours.

The main island offers good camping, hiking and trekking opportunities – the National Park Headquarters on the outskirts of the town can provide you with information about suitable trails and paths. There are no organised water sports, but there are opportunities for scuba diving and snorkelling. The Diving Centre is located on the seafront. Services are limited at present, but the centre should be in full operation later this year. Boat services are a bit problematic at present, but should improve soon.

There are some good beaches on Con Son. Some can be reached on foot, but the better locations involve a long hike or hiring a motorbike. There are many secluded beaches on the on the other islands.

There are no taxis on the islands, and virtually no ‘xe oms’ (motorbike taxis). However, it’s easy to hire a small motorbike to get around the island. Prices are somewhat higher than on the mainland.

Accommodation is basic and limited – the best hotel on the island is lower than our ‘local’ standard. Restaurants are few and far between, and the cuisine is rudimentary. Don’t be misled by tales of exotic fruits in abundance – it’s mainly bananas and coconuts. Everything else comes from the mainland. However, the seafood is first-rate.

Con Dao is located at a point where cool and warm ocean currents converge and create a localised climatic system. From June to September, frequent fierce squalls buffet the west facing aspects of the islands whilst the east is sheltered. In September, the currents and winds reverse thus exposing the east of the islands to bad weather until January. The weather is calm all over the archipelago during the remainder of the year. This unusual weather pattern allows swimming, snorkelling and diving to be an all-year-round activity.