Phu Tho prison is located on Nguyen Van Custreet. Visitors can walk or move by car to visit Phu Tho Prison. This is a French prison,which was built for detention, isolation of new prisoners sent to the island or before moving to other prisons.

In the French colonial period, this prison had 3 rows,including 2 rows of collective rooms and 1 block of isolate rooms, 1 kitchen room and 1 infirmary. After August Revolution in 1945 this prison wasrenewed to become 2 blocks (each block has 4 rooms).

They built more 2 rooms, room 9 and 10 behind the infirmary in the US puppet period. Room 10 was specialized room for separate area to complement Tiger cages area. Thus, it was divided into 15 small solitary confinement rooms. There are no iron bars on the ceiling like Tiger Cages, only interlacing barbed wires. The prisoners calling it a very witty name “Chicken cage in solitude” was detained here.Besides,there are other assistant works such as the cafeteria, warehouse, kitchen room, supervisors’officeand garden …

French colonial used Banh III to detain, isolate the new prisoners who have just brought to the island before moving to the other prisons.They did that in order to prevent news from the land spread to this prison and affected on older prisoners. Then Banh III became a specialized place for detaining political prisoners whom the French colonial sorted into “dangerous elements”or “unruly elements” class. Some other prisoners sentenced of disturbingor destroying social security, repeatedly escaping. ..were also sent there.

The period from 1939 to 1945,this prison was a place for the detention of prisoners who arrested before and after the South Viet Nam uprising (1940). They were comrades such as Le Duan, Le Hong Phong and Duong Bach Mai … Transfer flights of prisoners from Son La – Hoa Lo was banished to the island in the summer of 1944. There were many comrades who are leaders of the executive committee and the regional party committee North Viet Nam. Banh III was one of the worstprisons withharsh exile. Thousands of political prisoners were beaten, exiled to death during the French colonial period when they execute the white terror after Nam Ky Uprising.

Mr. Vu Van Hieu, the first Secretaryof Hon Gai mine, a special administrative regiondrew his last breath in a solitary room. In the last-minute, comradeVu Van Hieu handed over his coat for aninmate – Comrade Le Duan with the last farewells: “Try living that caters for the revolution”. Vu Van Hieu martyr has become the symbol of the communists: “Live for the party –not to leavethe party until die”. He was a source of inspiration for writers and sculptures to create the awarded coat statue through the poetry: “Until die, still undress each other “. 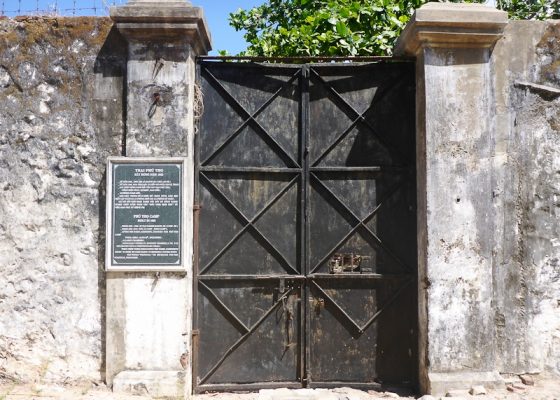